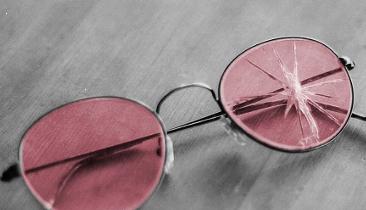 Bob L. at the Banff Round Up left us with this aphorism: “I was always cleaning up the wreckage of the future.”

One understanding of this is the fear and anxiety that I experience during the day. Often, I have started the day with a sense of impending doom. At other times, I don’t start with that feeling but acquire it through the day. The feeling seems to arise spontaneously. No reason or cause for that feeling of dread and doom that I can see or discern, but the feeling is there. And I combine this feeling with the alcoholic magic trick of converting feelings to facts. If I feel it, then it must be true.

What a way to live.

This feeling can pop up at any time during a day. I could have a great morning, an excellent lunch and then on arriving at the office something could set me off, and I would have a fresh and abiding sense of impending doom.

The frequency of this feeling was so great that I developed an acronym, a short form that I could use to describe my state of fear, I started referring to this feeling as my ID’s. My Impending Doom sense. It was handy for calls with my sponsor. I could short form the problem and say “I am suffering from the ID’s.” Or I could tell my wife Doreen, “I have a case of the ID’s.”

I can tell you, from my experience and observation, that the fastest way to rid myself of the ID’s is to ask for help. I learned after many experiences of the appearance of the ID’s and calling for help, the ID’s went away more and more quickly. Often by simply stating the problem, the ID’s went away. My sponsor got used to me calling, saying “I am suffering from a case of the ID’s… thanks, I just needed to say that. Goodbye.” That was all I needed. Sometimes the ID’s would dissipate as I dialled the number. Sometimes I had to talk about what was going on. Regardless – reaching out evaporated the ID’s.