Toronto, November 14, 2019. Today Charity Intelligence releases its 2019 Top 10 Impact Charities. A growing number of donors each year are looking for terrific charities to support, particularly those that have measurable high demonstrated impact. “Impact” and “investing” are popular buzzwords often used by charities along with marketing slogans saying they “make a difference”. Charity Intelligence’s rigorous analysis measures the “difference”, or the impact, charities make. Like all investments, returns vary considerably. Some charities have high impact returns, some charities have low impact returns. Of the 203 Canadian charities that we’ve analysed for impact, these Top 10 have the highest measurable demonstrated impact. Our calculations estimate this group of Top 10 Impact Charities delivers average returns of seven times for every dollar donated, compared with average returns of 1-2 times on the dollar. 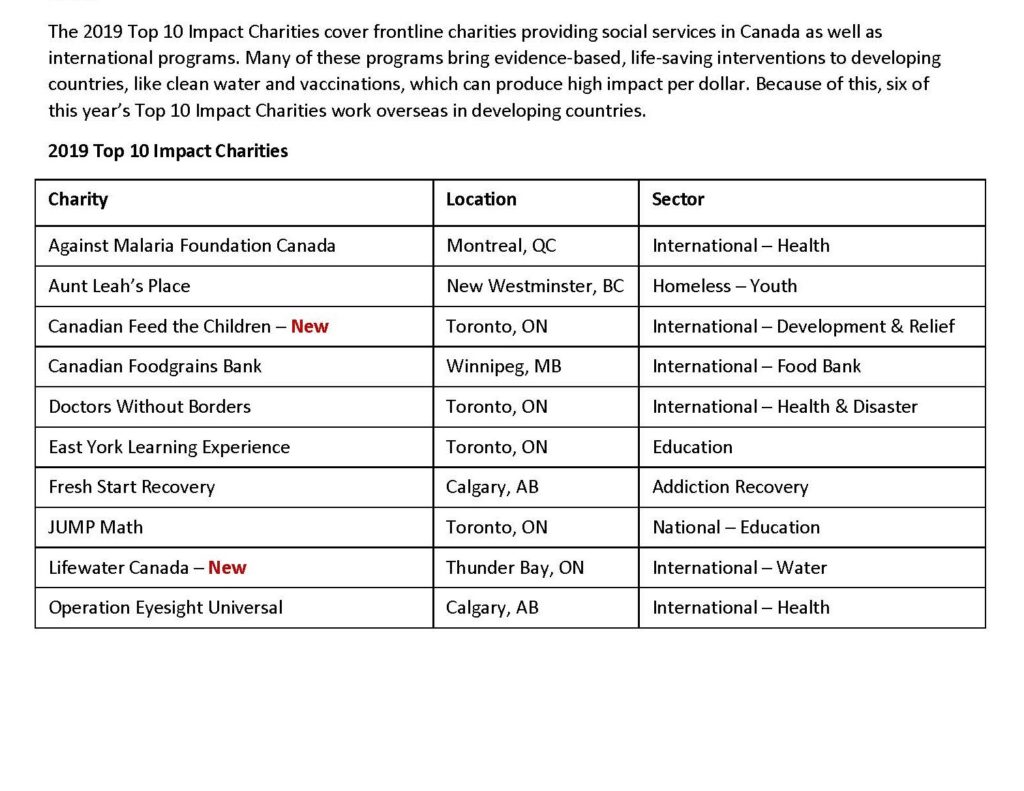 These Top Impact Charities are a breed apart from the over 750 Canadian charities we report on and rate. Charity Intelligence’s star ratings are based on an assessment of 4 objective aspects: 1. donor reporting, 2. financial transparency, 3. funding need, and 4. cents to the cause. The best charities are listed using this approach in the 2019 100 Highest Rated report. The demonstrated impact rating is different and looks at only one aspect: for every dollar you donate, what’s the measurable return? Rather than just heart-warming stories, impact donors feel good about proven results, data quality, and strong counterfactuals. Recently a charity asked, “wouldn’t you agree that making a child smile is priceless?” Our answer is “no”. Impact donors always consider opportunity costs. Impact donors are pragmatic. Money is a scarce resource. If comparing two charities where one charity saves lives for $100,000 each and a second charity saves lives for $20,000 each, impact donors will support the second charity that creates 5 times the impact per dollar. Five lives saved compared with one life saved for the same donation. Impact donors give for the highest returns – the biggest bang for the buck.

Some call Charity Intelligence a “charity watchdog”. We see ourselves as research analysts who help Canadian donors give better. Yes, we hold charities to account for the generous support they receive from Canadian donors and expect them to be financially transparent, and yes, we call out exorbitant overhead costs or charities that don’t need more funding. Similarly, each giving season we also call out the best impact charities we’ve found. Charity Intelligence’s reports are independent – charities do not pay for ratings or accreditation.Charity Intelligence’s reports and ratings help Canadians give confidently. With greater confidence, people say they gave 32% more money.