Toronto, November 28, 2017. Today Charity Intelligence (Ci) releases its 2017 Top 10 Impact Charities list – a must-read for Canadians looking for impact in their giving. These are the 10 highest-impact charities found by Charity Intelligence in Canada this year, to which donors can give confidently and make the most measurable difference.

Charity Intelligence has picked the most effective Canadian charities that combat issues such as hunger, homelessness, health, and improving education. For the first time, a charity providing international aid, Doctors Without Borders, has made this list.

Evidence shows that the 10 high-impact charities are likely to be the most effective at changing lives. Ci’s Director of Research, Greg Thomson, says “giving for impact means looking beyond administrative and fundraising costs to see what difference a charity is making in the lives of its clients. For your dollar, these charities are creating the most positive change we have seen.” If you donate $100 to a charity and it creates $200 worth of social value, that is a good investment. If the charity can create $300 worth of value, that is even better. These 10 high-impact charities as a group are likely to produce over $600 in value from a $100 gift!

To do this work, Ci has teamed up with Success Markets Inc. (SMI), a U.S.-based charity that was developed for the sole purpose of taking the guesswork out of charitable giving. Together, we measure the impact of each dollar donated to help donors see how they can deliver the most good for the same level of giving.

The Top 10 Impact Charities range in annual donations from $164,000 to $55.8 million, showing that charities of any size can provide impact. The list contains two charities that operate nationally, one operating internationally, and seven local charities from across four provinces, operating in seven different social service and education sectors. Last year, donors to our list of high-impact charities created an additional $100 million of social value in Canada simply by shifting the way they donate. 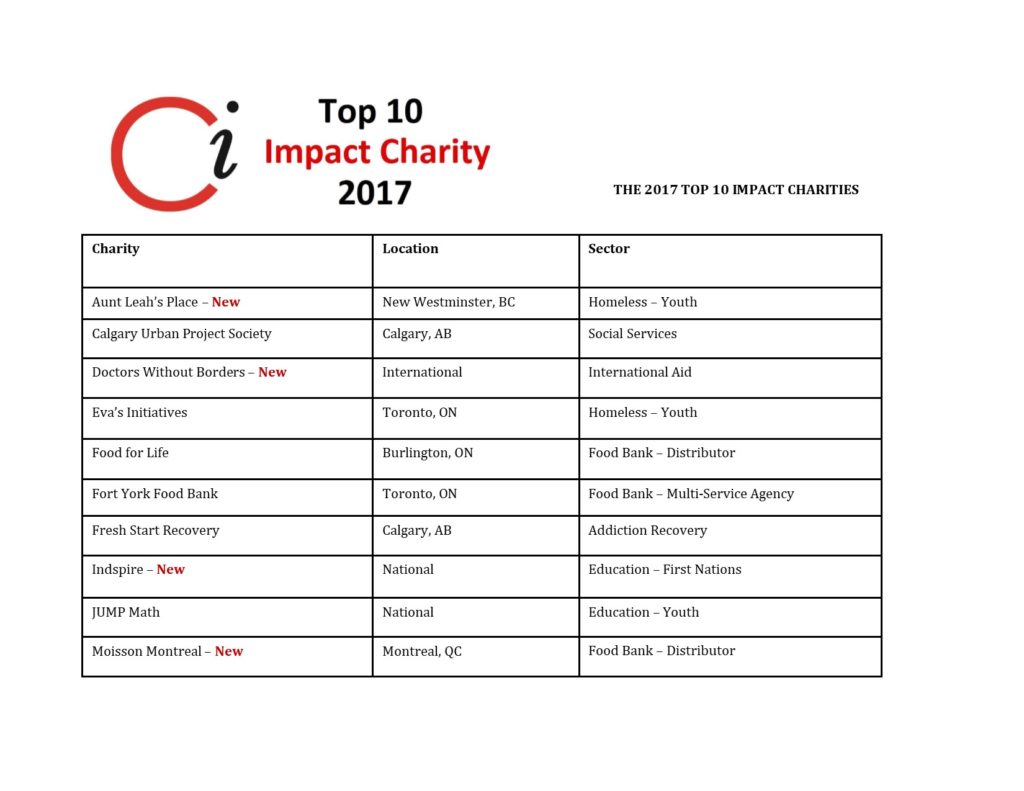 For more information, or to schedule an interview, please contact Greg Thomson at 416.363.1555, [email protected]