FSRC recognized as Charity Intelligence releases its Top 10 “Bang for the Buck” charities as a new impact fund. 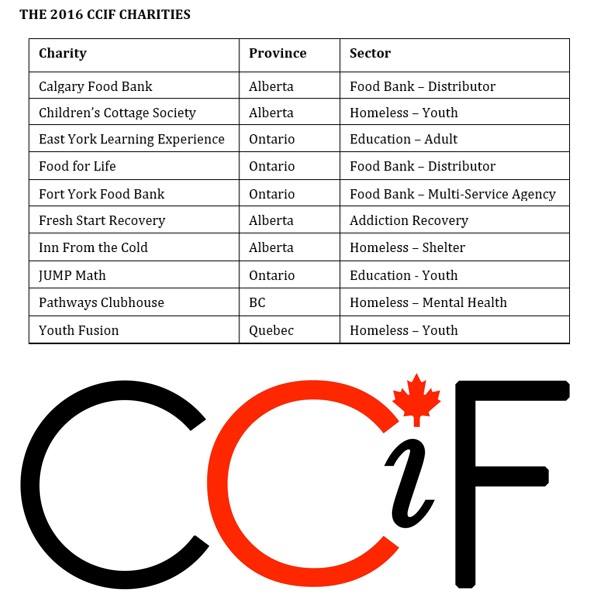 Charity Intelligence (Ci) has released its 2016 Canadian Charity Impact Fund(CCIF).  The CCIF provides donors with unusual confidence that their generosity will actually help Canadians improve their lives. It does this by creating a portfolio of 10 proven, high-impact social service charities. We are graetful to share the recognition with other agencies that we work or have worked with.

CI has picked the most effective Canadian charities  which combat issues such as hunger, homelessness, and improving education.  Evidence shows the 10 CCIF charities all make a significant difference in the lives of Canadians and are likely to be the most effective at changing lives.  Ci’s Director of Research, Greg Thomson, says “if you were investing in companies, you would choose those most likely to give the best return. We’re trying to get the best return in combatting poverty in Canada.”

To do this, Ci works with a U.S. charity called Success Markets Inc. (SMI).  SMI was developed for the sole purpose of taking the guess work and lack of transparency out of charitable giving.  It has developed metrics which measure the impact of each dollar donated, using techniques honed in years of experience in the private sector and government.  This Social Return on Investment (SROI) shows donors how they can deliver the most good for the same level of giving.

The charities in the CCIF create the highest overall value for Canadians from a group of excellent charities that Ci and SMI have analyzed in detail.  If you donate $100 to a charity and it creates $200 worth of social value, that is a good investment. If the charity can create $500 worth of value, that is even better. The CCIF contains 10 charities that, as a group, are likely to produce $1,100 in value from a $100 gift!

Last year, donors to the CCIF created an additional $100 million of social value in Canada simply by shifting the way they donate. The 10 charities chosen this year for the 2016 Canadian Charity Impact Fund created an average of around $11 in social value per dollar donated last year. This shows that extraordinary returns are possible.

To participate in the fund, a donor simply writes one cheque to Charity Intelligence, or donates on the Ci website, and indicates that it is to go to the 2016 Charity Intelligence CCIF.  Donors receive one tax receipt from Ci. To ensure accountability and transparency, donors will receive an impact report within a year, describing the actual results of their donation. One hundred percent of all donations received are equally distributed among the 10 different charities from 4 provinces and in 7 different social service sectors.